I’m Maddy, a designer and printer, originally from Nashville, TN. I was so lucky to be able to spend the month of September playing on the letterpress and making use of FCAC’s extensive wood & metal type collection.

I had recently attended a workshop at Penland School of Craft in North Carolina, where we explored using a laser engraver to make printing plates for letterpress. One thing I found really exciting there was using a combination of laser cut lines and thick gel medium to create a more painterly image for printing.

The work I did over the month helped me explore a new, more spontaneous side of letterpress that I’m excited to dive deeper into. Thank you to Megan and everyone at the Flower City Arts Center for having me!

There are lots of exciting things to try at Flower City Arts Center. As the photography and digital art intern this summer, I got to get a taste of the facilities offered here. One hidden gem of Flower City is the Risograph Printer.  I was lucky enough to be able to play around with the printer and create a few designs, and I fell in love!

What is Riso printing?

For those who don’t know, the risograph pringint process is sgjhimilar to screen printing. Your original image is scanned on the Riso and burned onto a “master copy” which is then wrapped around a print drum which pushes ink through the screen and onto paper.

Here is why printing on the Riso is so unique:

The riso printer is a wet ink process that uses bright ink to create delightful color on the page. Because each ink color is printed separately, the overlap of inks creates interesting color layering. Adding colored paper changes how color appears as well. Flower City currently offers 7 ink colors which is more than enough to create bright, beautiful work!

Part of the charm of the Riso printer is its uniqueness. Because of the printing process, ink coverage can vary to create an interesting speckled-like texture. No two prints are exactly the same and it gives the prints the feeling that there was a human hand creating them. As always, texture of paper can add a new element to the print that is accentuated on the Riso.

With the Riso, the sky is the limit! Digital files, drawings and photography can be easily translated and printed through the Riso. That is why it is a favorite among graphic artists, designers and photographers alike!

I am no technology wiz, so when I was I would be printing on the Riso I was intimidated. But, to my surprise the process was extremely intuitive and easier than I had ever thought. Once you get a sense of how the process is executed, it is easy to get comfortable.

Come on down and jam to some Lizzo while printing on the Riso!

If you are interested in learning about this process or getting a chance to use the machine check our upcoming Riso Projects Class and our Intro To Riso Workshops!

Click here to learn more about the photography and digital art facilities! 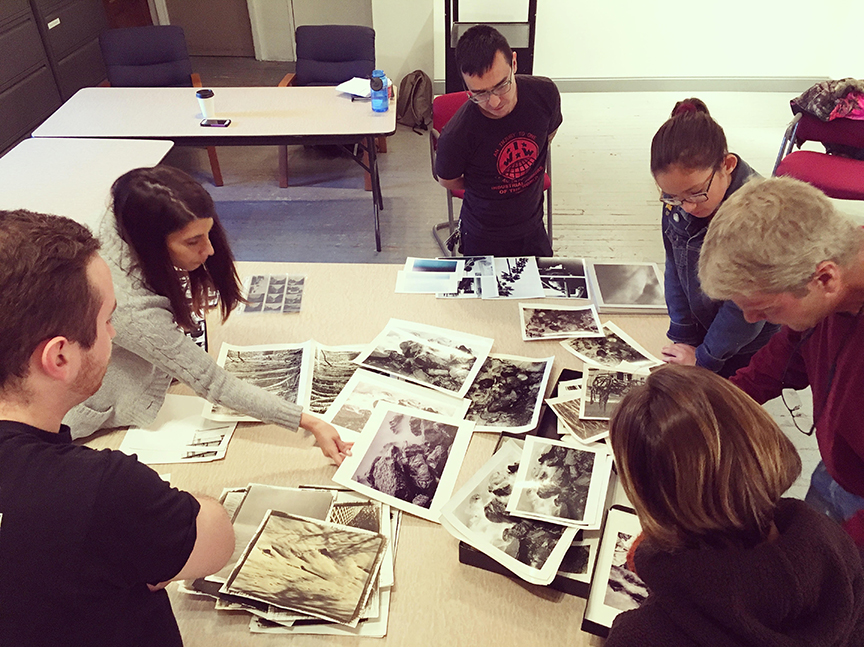 I’m looking forward to our next Darkroom Club meeting this Sunday! Last month we shared prints from several members and we’d love to have YOU join us this month. We’re meeting December 10th at 11am in the Sunken Room.

Bring your prints with you to share. This is an informal critique session where we share our current projects and generally just chat about darkroom photography. It’s a lot of fun! I’m excited to see this group grow in 2018. If you have any questions or feedback please do not hesitate to contact me at photo@rochesterarts.org or 585-271-5920. I hope to see you here at the Center on Sunday!

One night Mark Watts and I were working in the darkroom together while he was making test prints for an upcoming exhibition showcasing his pinhole camera work. Prior to meeting Mark, I had been fairly disinterested and dismissive of pinhole photography which to me felt like another far-reaching “lomo” trend. I think it’s time to give pinhole cameras a second chance.

Seeing Mark’s pinhole prints in the darkroom for the first time, I was captivated by their sharpness and clarity, though not perfect in those respects but, certainly fair for artistic work. Now I’m scratching my head as those rusty pinhole knowledge gears start breaking into motion.

Meanwhile that same night Megan Charland had been coincidentally perfecting her pinhole skills in preparation for a Friday Fling in pinhole photography class. I discovered this running into her in the hall where she was inspecting a freshly developed pinhole contact print. To create her pinhole images Megan was using a handmade tubular oatmeal can as a camera; the image was fairly sharp and rich with details. Fast forward to Friday night, I jumped-in on that pinhole class to get my mitts on one of those cameras. After viewing my first pinhole picture I was impressed with the acceptable level of detail in the image – though my exposure time definitely needed an adjustment.

In these moments enters certain realizations:

One problem was that I needed the use of rise and fall camera movements which are crucial when shooting architecture. Also Mark had complained about the guesswork involved when trying to frame a composition without a viewfinder. However implementing those improvements seemed like an exciting challenge.

At this point a normal person would transcend gradually into a healthy obsession; perhaps google pinhole cameras for a while, join pinhole Flickr groups, follow pinhole culture boards on Pinterest, etc. I skipped all of that and still not knowing what a real well-made 4×5 camera even looked like. So I snagged a 4×5 film holder and my trusty micrometer, and started doing math to figure out my own design. The only thing I googled for was a useful pinhole size calculator and immediately found this site, no pictures, just all the calculators I would need.

So, here is my challenge: build a vertical shift capable 4×5 view camera with an accurate viewfinder that compensates for raising the front standard frame shift. First step: build a cardboard proof of concept prototype.

After a week of visualizing various designs and crunching numbers I settled on building the Frankenstein pictured at the beginning of this post. Looking past that duct taped “weather sealed” exterior there’s a precision gaffer’s tape lined interior that accepts 4×5 film holders, gives me a 35mm format equivalent focal length of 28mm, and offers about 33mm of rise. I’m not worried about the viewfinder challenge just yet in this prototype, instead I’m only testing various pinhole sizes and actual shift ranges.

Stay tuned for part two where I create the actual pinhole and study some test shots.